Halo! We thought it would be nice to give you one last update before the end of the year, also because a lot has happened since our previous newsletter. So much, that we’re now switching to BULLET POINT MODE.

Lots of stuff, eh? We can now switch the bullet points off.

Juicy picture of the month

This newsletter is already pretty long, but who doesn’t like a good, or at least interesting picture? We present you an “accidental art piece” that Tim Gaedke drew in our new meeting room: 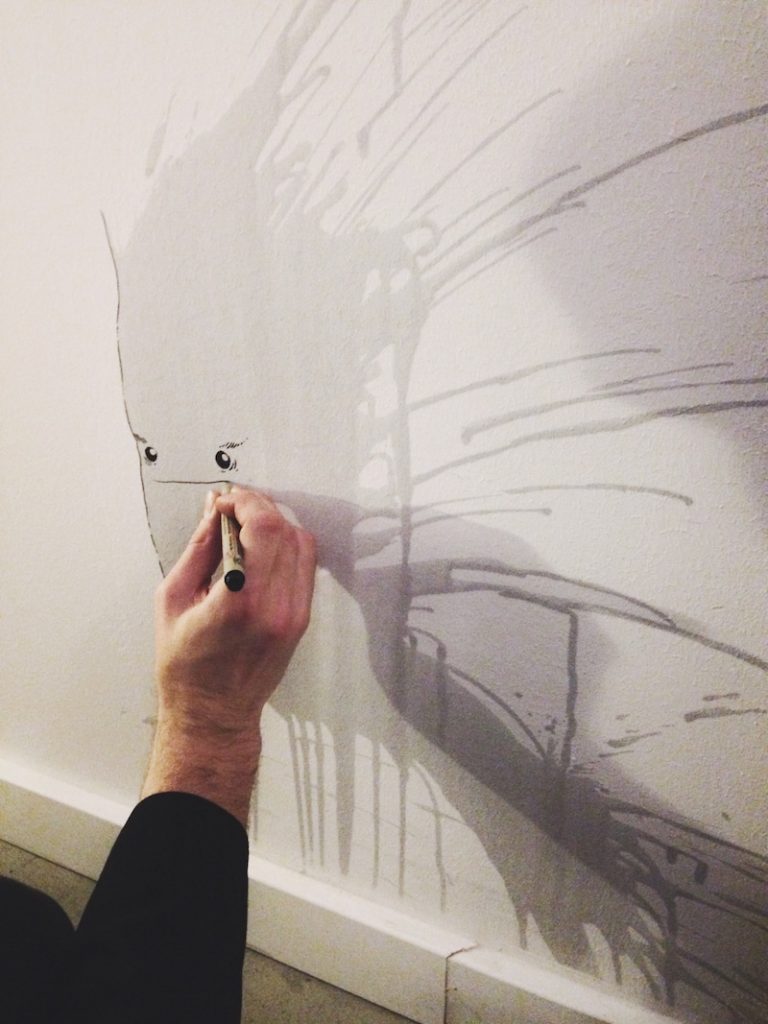 How did this happen? Well, let’s just say that during our xmas party there was a glass full of some beverage on the floor, which someone kicked (we hope not on purpose), spilling the liquid on the wall, creating an interesting shape.

There are only two things you can do at that point:

We chose the latter. Don’t miss the making-of video!

Updates from our members

Almut Schwacke says: While other saftis were busy with an indie game development workshop at UE in Berlin I had a week of teaching game audio there. Game design students were supposed to bring their own projects and work on sounds that would improve their game. I had two suitcases of foley props available and tried to make them aware of different materials and textures in sound. Bottles were smashed, glasses were made to sing, and one team even recorded an awesome ukulele cover of David Bowie’s Space Oddity. It was a crazy week and some students really developed an idea of their game‘s sonic identity. I also started working on this lovely game that makes me happy every time I see it.

Daniel Berndt says: It’s been a busy couple of months for me personally. I’ve done a lot of freelance work ranging from exciting stuff like training neuronal networks on twitter data to creating WordPress pages. But I’ve wrapped up all of theses projects now and got enough funds to invest most of my time into Codecks for the foreseeable future. Around the time this newsletter comes out, we’ll be able to ship an important feature – a pretty decent Slack integration. Another focus lies on cleaning up some of the code. It’s been close to three years since the first lines have been written. This translates to centuries in the web development world! So to prepare for all that I’ll spend most of December in distant lands.

Firepunchd says: Chicken Jump has received a small christmas update adding even more snow and some new characters. I am also happily working on the Ridiculous Glitching enhanced mobile version and am looking for a partner to release this game with.

inbetweengames says: As well as more updates to All Walls Must Fall – you can now play Daily Challenges and compete for the best score – we also shipped our very first game, The Mammoth: A Cave Painting, for free on Steam! This was the small jam game we made back in 2015 about a mother Mammoth finding her children. It went so well, we founded inbetweengames. It’s great to see people playing it again, and even better that we’ve had many players contribute translations for a variety of languages! We’re still looking for a few translations – if you want to contribute, check out this post.

Jörg Friedrich says: Through the Darkest of Times has won funding by the Medienboard Berlin Brandenburg – wooohooohoooo! \o/ This will allow wonderful artist and partner in crime Sebastian S. Schulz and myself to fully dedicate our time and focus on the game. Can’t wait! By reading this, you prove to be someone who enjoys reading newsletters – if you happen to also enjoy games about resisting Nazis in 1933 Berlin, you might like this newsletter too.

Jörg Reisig says: We finally have a website for our game and I am happy to start working with the team on interface concepts, cool new alien civilizations and experimenting what music would fit to our galactic gardening game.

Lorenzo Pilia says: The second half of the year has been pretty busy. In September I attended A MAZE. / Johannesburg, where I took care of social media for the festival. I then spent a week travelling around South Africa, together with some game developers, which was quite special. Back in Berlin, I was mostly focused on VR NOW, taking care of the awards. Alongside that, I organised two Talk & Play editions, the third Civic Game Jam of the year and a tiny game jam for a friend, coordinated the Saftladen workshop at UE, and put together this newsletter. Oh, I was also interviewed for a podcast, so check it out if you want to listen to my soothing voice while falling asleep. Coming up next: help make the Global Game Jam 2018 happen all around the world!

map says: I’ve spent the last few weeks helping out on the broadcasting team of Desert Bus for Hope, a charity that plays the worst video game of all time to raise money for children’s hospitals. It’s been an amazing experience and I met a lot of awesome people. It has been a ray of light in a year of depressing news and I’m very thankful for that. Once I’m over my jetlag I’ll get back to fixing bugs in Carcassonne and working on a new expansion.

Markus Arvidsson says: What happened: The Solus Project came out on PS4 with PSVR support in September! We also launched a small patch for it on PC and we are now working on a bigger update with target release date before the year is over. My “space game” prototyping continued with programming for networking and UI. Lastly I am also doing some freelance/contract work for Mojang in Sweden so I was there three weeks and had a good time!

Maschinen-Mensch says: We have a new employee! In fact, our FIRST employee, so feel free to celebrate with us by saying hello to Ole. Oh, and there are many more reasons to celebrate, for example our huge new update for The Curious Expedition, which is coming in the next days. It will add the long awaited achievements (60!!) and … wait for it …. MODIFICATION SUPPORT! It’s a huge and somewhat scary step, so we’re super busy preparing everything. For example, we’re currently creating a modding documentation wiki. Oh, and if you are interested in modding, or interested in anything Maschinen-Mensch related, make sure to get in touch on our new Discord community server. Adventure awaits!

Mr. Luca was on a secret mission in Italy and he couldn’t be reached for an update. (We believe he’s there just eating food and being lazy)

Stephan Hövelbrinks says: Yes, that Death Trash Kickstarter is still happening soonish, so go over to deathtrash.com and subscribe if you haven’t done so already. The project, while still feeling like a monumental task, is making steady progress and I’m happy about how it evolves. Apart from working on this I have also begun sharing more of my art process. If you like watching pixelart paintings coming to life, I’m posting them on Twitter. Last but not least I am more proactive now in giving myself some leisure time too and I use this for playing games again (Hooray!) and spending my sundays on random learning and prototyping.

Stina Flodström says: I’m just about to finish the project that I’ve been working on as a freelancer for the last months. I’ve been building an environment in Unreal Engine to be used for annotated image data and machine learning together with Realsynth.de. This particular project is to be used for trains so I’ve been building an environment around train tracks – creating rails, buildings, a station, signage and landscape from an existing location in Germany. First time I’ve worked on an environment that’s not for humans to look at but for computers, 2017 – crazy future is here already.
Studio Fizbin says: A lot has happened since the last Saftladen newsletter at Studio Fizbin. We released The Inner World – The Last Wind Monk to all possible platforms (except for the Nintendo Switch, yet!). You now can buy the game on your PC, Mac, Linux, SteamOS, Xbox One, PS4, iPhone & iPad, Android phone and tablet. Since then we’ve been working hard on smaller patches and customer support. But all this hard work brought us a lot of positive feedback in form of reviews and direct messages (those are the best!) and in the end – this is (part of) what we’re doing this for. *wink* *wink*

Thomas van den Berg says: I’ve been doing some exploratory work on a few new prototypes, as well as the ongoing Kingdom stuff. We’re releasing a patch with an extra island for Kingdom soon, and work on Two Crowns is also ramping up.

That’s all for this time! For more frequent updates, we recommend following @saftladenberlin on Twitter (here’s a list of all our members) and on Facebook. If you liked this newsletter, please forward it to a friend!

« Back to news overview